Director of NeuroSchool since its launch in 2018, François Féron stepped down on July 1, 2020 to embark on a new adventure. To celebrate his departure and to thank him for his involvement in the NeuroMarseille community, his colleagues shared his story in a few lines.

After graduating as an agricultural engineer, François Féron worked for ten years as a journalist for the newspaper Libération where he managed the Europe team. During these years, he published several works including books on popularizing science. After obtaining his PhD in neurobiology in 1995 at the Claude Bernard University in Lyon, he did a postdoctoral fellowship in Australia at the Institute for Cell and Molecular Therapies in Brisbane. Appointed professor at Aix-Marseille University in 2004, Francois divides his time between teaching at the Faculty of Medicine and the Faculty of Science, and his research team at NICN and then at the Institute of Neurophysiopathology (INP). He is currently leading a team working on adult stem cells and is interested in neurodegenerative pathologies and psychiatric disorders. His scientific expertise is internationally recognized and his discoveries on olfactory stem cells have led him to direct neural cell therapy trials at the Culture and Cell Therapy Unit (AP-HM).

A major contributor to the structuring of  Marseille’s neuroscience community

Armed with his experience, in 2013, François Féron in collaboration with Laurent Vinay and Frédéric Chavane set up the first PhD program in Neuroscience at AMU, funded by A*Midex (PhD program in Integrative & Clinical Neurosciences). In 2014, with Anne Kavounoudias, Christophe Porcher, Jean-Philippe Ranjeva and Jean-Denis Troadec, he obtained funding from A*Midex for a programme to internationalise the Neuroscience Master’s programme and set up innovative training courses (Brain Master Program). François Féron then worked with all the energy that characterises him to harmonise training programmes across all levels. This long-term work was crowned in 2018 by obtaining very selective funding from ANR and A*Midex for a Graduate School in Neuroscience at AMU: NeuroSchool, an avant-garde training for and by students, which brings together the three levels of training (Bachelor, Master, PhD), the Ecole des Mines (Gardanne campus) and three biotechnology companies.

Of course, we would like to warmly thank François for his complete devotion to our community and his major role in the emergence of major structuring projects in Marseille neuroscience. But, beyond all the wonderful actions he has carried out, we want to thank him for having left his mark on the neurosciences of Marseille with his rich and humanistic vision of what training and research should be. 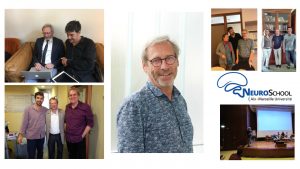 Your opinion is important to us